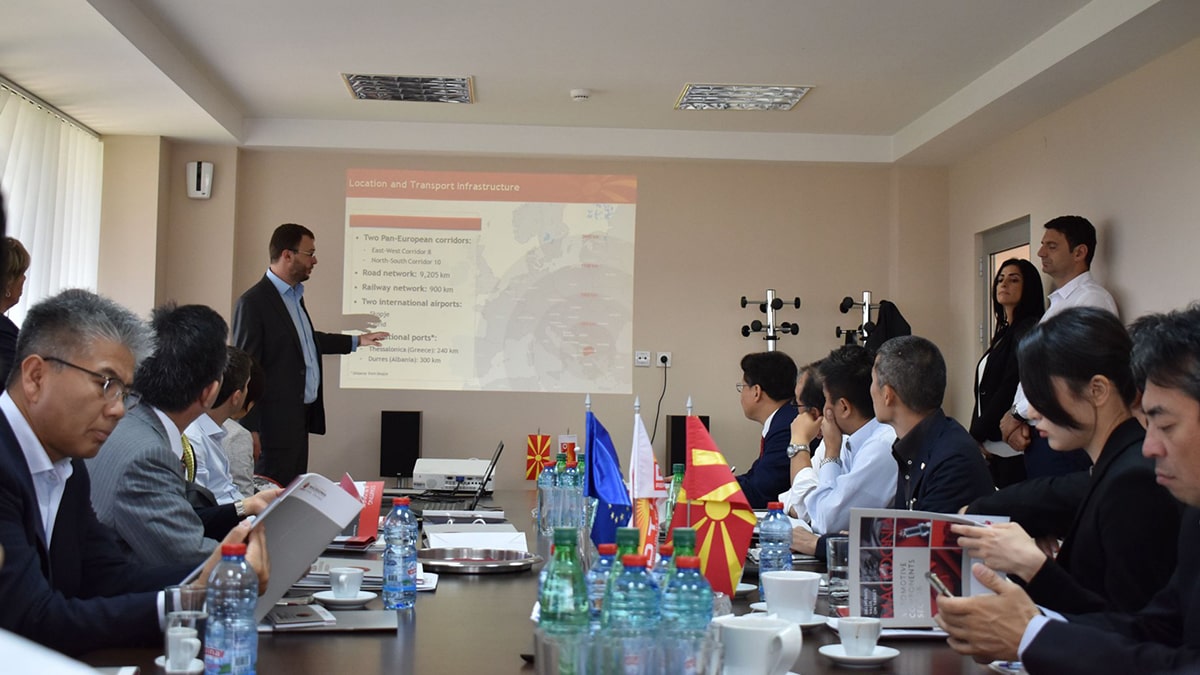 A Japanese business delegation headed by Yoshihiro Seki, State Minister of Economy, Trade and Industry, is on a three day visit to the Republic of North Macedonia.

During their second day, the Japanese business delegation, along with the Ambassador of Japan in North Macedonia, Keiko Haneda, visited the North Macedonia Free Zones – DTIDZ and toured the Skopje 1 and Skopje 2 free zones.

Deputy Prime Minister Kocho Angjushev stated that the Government’s goal is to attract foreign investments with a high level of technological development, indisputably present in Japan, which is one of the most developed countries in the world.

“Minister Seki and I discussed intensifying the economic cooperation between our two countries, in order to attract Japanese investments to North Macedonia and recognize the possibility of our country acting as their gateway to the European market. Additionally, we also talked about increasing exports from our country to Japan, and which products could be placed on their market. Representatives of large Japanese corporations such as Mitsubishi, Yazaki, Mitsui and others were also part of the business delegation. We hope that this visit will show interest among some of the investment companies, and thus increase cooperation between our two countries,” Deputy Prime Minister Angjushev said.

Minister of Foreign Investments, Zorica Apostolska, emphasized that the Government is open to cooperating with all companies, and keeps in constant contact with companies, starting from the initial stage of announcing their interest up to the realization of the investment project.

“This visit is a great opportunity for us to present the economic policies of the Government, as well as to point out that we are committed to the entire process of an investment cycle, from providing necessary information to investors, to institutional care and monitoring of their projects, up to the full realization of the investment project,” stated Minister Apostolska.

Japanese State Minister Seki suggested that this year marks 25 years since the establishment of diplomatic relations between the two countries, and last year, Japanese Prime Minister Abe announced the initiative to intensify Japan’s economic relations with the Western Balkan countries.

“Today I am here with representatives of the association JETRO (Japan External Trade Organization), a Japanese organization that takes care of Japanese investments abroad and the promotion of the Japanese economy. Today I am joined by representatives from automotive and cosmetic companies, tourism, the financial sector, logistics companies, and companies from other industries. We visited the free zones in Skopje, and are satisfied with what we have seen there. Many activities are taking place and we will discuss the ways for interpersonal cooperation, which would benefit both countries,” said State Minister Seki.