KOVACEVSKI AT THE OPENING OF CANADIAN “MAGNA” IN STRUGA: NEW INVESTMENTS AND EMPLOYMENT EVEN IN CONDITIONS OF THE GREATEST WORLD CRISIS

At the official opening of the Canadian investment in North Macedonia, specifically in the Technological-Industrial Development Zone in Struga, Prime Minister Dimitar Kovacevski emphasized that the new investments are a confirmation of the successful government policies even in the conditions of the world’s biggest economic and energy crisis.

Prime Minister Kovacevski pointed out that the new investment in Struga for the Government is a confirmation of the commitments for balanced regional development, for new well-paid jobs, and thus a new stimulus for our economy. 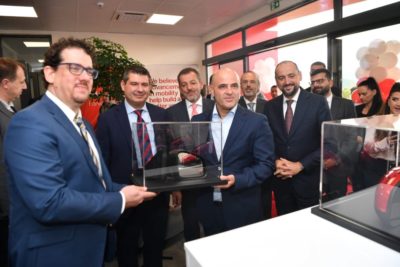 “Such investments are a clear signal that North Macedonia offers a predictable business environment for companies, for new investments. And according to the 2022 Investment Monitor Index, which compares Gross Domestic Product against foreign direct investment, we achieved impressive results. As a country we are significantly above the global average when it comes to attracting greenfield investments. Almost 90 percent of the investments come from new projects, while the remaining 10 percent are from expansion investments. Investments in renewable energy sources are the leading sector for incoming Foreign Direct Investments in the country with seven projects, followed immediately by the automotive, software and IT services sector, each with six investments. This is the result of our stable business environment, membership in NATO, as well as the beginning of negotiations with the European Union. For us as the Government, this is a strong confirmation of the successful concept of TIDZ and the Government, which we have been implementing for 18 months. And in times of global challenges, we reached agreements of over 620 million euros of investments, which is almost two-thirds of the total volume of investments made in the previous 10 years”, said Prime Minister Kovacevski and sent a message to investors despite the biggest global crisis and the challenges facing we are all upright, to take advantage of the opportunities and invest their capital in North Macedonia.

David Crespi, vice president of the company “Magna International” emphasized that the new investment of “Magna” in Struga is the first production facility of the company in North Macedonia, which will support several European car manufacturers. 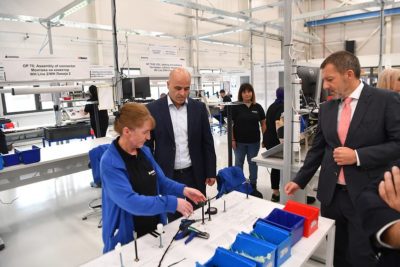 “It occupies an area of ​​approximately 17,000 square meters, the building is already working and since the beginning of this year there are more than 300 employees, and it is expected to employ more than 1,000 employees by 2024. As the business increases, so will the number of employees. We are excited about the opening of Magna’s first factory in North Macedonia and the opportunities it brings to increase our share in Eastern Europe and create new jobs in the region”, said Crespi and emphasized that the Government of North Macedonia and the local community are very cooperative and strongly believes in continued cooperation in order to support our customers further.”

“For me, real development is when we invest in a better life for people and open opportunities for progress, because people are the ones who move and develop the economy, not capital. That is why I am proud that by investing in such technologically advanced companies as “Magna” that bring well-paid jobs, we are opening a chance for a decent life to over 1,300 of our fellow citizens here. I am particularly encouraged by the fact that in times of global economic challenges, with a smart approach, we manage to create a good business climate and gain the trust of existing and new investors. 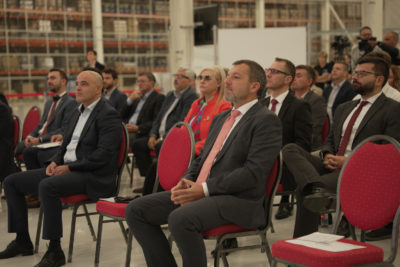 In the past 18 months alone, with the new concept of TIDZ, we have reached contracts in the amount of 620 million euros, which bring over 4,000 new jobs. The government and TIDZ remain committed partners of such investors. We continue together in more new success stories like this,” Despotovski said in his address.

The event was attended by representatives of the company’s management, employees, the Vice Prime Minister for Economic Affairs and Coordination of Economic Departments and Investments, Fatmir Bitiqi, as well as numerous guests.