The Director of the Directorate for Technological Industrial Development Zones, Jovan Despotovski and the Commissioner for Trade of Her Majesty for Europe, Mr. Chris Barton had a meeting to discuss opportunities for cooperation and new investments, in the context of the new concept of work of TIDZ. 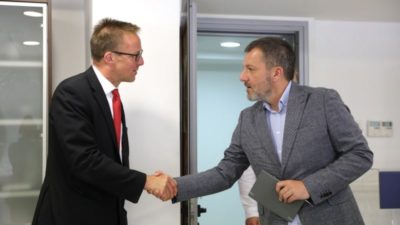 The director of TIDZ, Despotovski emphasized that the advantage of Northern Macedonia as a small country is that it recognizes the needs of investors and offers a flexible approach. He also pointed out that a key asset in attracting foreign investment in the context of global developments is the stability guaranteed by NATO membership, as well as the predictable business climate, access to quality infrastructure and efficient public services. The meeting discussed specific mechanisms for cooperation and exchange of experiences regarding investment activities in both countries.

Despotovski also informed about the preparations for a new cycle of investment promotion activities, focusing on Western Europe, USA, as well as East Asia and announced the beginning of a new promotional campaign for investment opportunities in Northern Macedonia, in cooperation with the renowned British magazine “Economist”.  The campaign is based on the presentation of the ten-year results of the operations of the companies in the TIDZ, which according to the analysis, have achieved continuous growth in the past decade and are constantly growing. Only the total revenues of the companies record an average annual growth of 16%, and there is an increase in the number of jobs, salaries and payments to the state budget.