Prime Minister Dimitar Kovacevski addressed an event on the occasion of the new investment of the German company “Kil Macedonia”. It is about the construction of a new production facility in the Technological Industrial Development Zone in Tetovo. 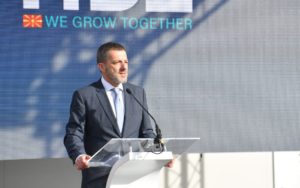 The company “Kil Macedonia” has already been successfully operating for 6 years in our country and at the moment over 130 of our fellow citizens produce innovative transit passenger seats for commercial vehicles and public transport. As the Prime Minister pointed out in his address, the successful growth of the company led to the need to further expand their portfolio with a new investment of 9.2 million euros, which means 150 new jobs, with an expected total export of over 160 million euros in the next 10 years. The start of production from the new factory is planned for next year 2023. 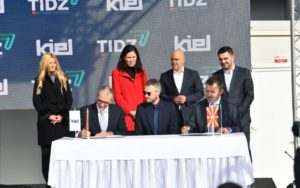 “Economic policies and plans of the Government give results. We are a NATO member country, with negotiations for membership in the EU, a stable partner for the investments of companies from Europe and the world. This is confirmed by the existing investors working in our country, from the USA, France, Germany, Turkey and numerous other European countries that share the opportunities for investment in our country and the conditions for the growth and development of companies. And in these difficult times of crisis, our task is to provide conditions for the creation of new jobs, but of course also better paid jobs to cope with the rising cost of living. And here in the German investment in “Kil Macedonia”, the average net salary is above the national average. Just from a few new investments that we have announced in the past few months, more than 1,700 new jobs are being created. To be more precise, the joint investment of “Yangfeng” and “ARC Automotive” will create 100 new jobs, we also opened the second factory of the American company “Kemet Electronics” in TIDZ with 360 new jobs, the Canadian “MAGNA” in the zone in Struga with over 1,000 jobs, the Turkish investment “TEKNOPANEL” which will create 120 new jobs, as well as today’s new investment of the German “Kil Macedonia” with about 150 new jobs”, Kovacevski said. 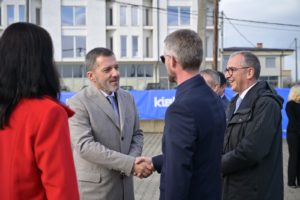 The Minister of Economy Kreshnik Bekteshi emphasized that all the efforts made by the Government to attract foreign investors and ensure the best business climate for companies are bearing fruit.

When we brought the Economic Growth Plan nearly five years ago, there were many skeptics that it would not produce the desired results.

But the results on the ground show exactly the opposite, namely that with a predictable business climate and support for companies working on growth and development and opening new jobs, success is inevitable.

Despite the COVID-19 crisis and despite the energy crisis that has gripped the whole of Europe and brings great uncertainty, foreign investors recognize in North Macedonia a reliable partner and an opportunity for the long-term realization of their plans, and thus the growth and development of their companies,” said Bekteshi. 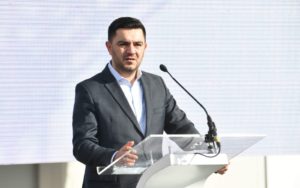 Ambassador Anke Holstein spoke about the importance of new investments.

“The trustful climate of cooperation with the Macedonian Government is an important sign of quality for the North Macedonia location. Together we will continue to nurture it – so that those who are already here can work successfully, as well as to further advertise North Macedonia as a good destination for investments,” said Holtein.

Christian Strand, general manager of “Kil Macedonia” said that the Kil Group has been working for more than 75 years in several countries of the world and is a leader in the production of seats for trains and buses. 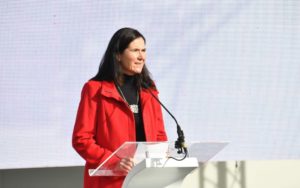 “The initial goal of this factory was to provide seats for the Van Hall factory in Skopje, because historically speaking, following customers in their operations is our kind of practice. Taking into account the operation of the last five years since we started working in Macedonia, we can freely say that we have already made a success story.

Since the capacities of the existing production facility have been exhausted, Kiel decided to make an additional investment in the Industrial Zone in Tetovo. The same was realized with great support in the overall process from TIDZ, the Government, “Normak”, as well as other entities. We are proud to have this additional investment in North Macedonia, because it is not only an increase in the existing production, but also an expansion of the scope of our operations in the field of welding, painting and making sponges. This will cover the entire range of train seat production activities in our factory and it is safe to call the complete seat “made in Macedonia”, and we will grow into a center for train seats from design to production in the Kiel Group” , Strand said. 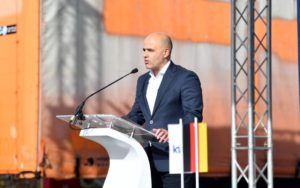 Jovan Depotovski, director of TIDZ, pointed out that Kiel is the first company that already works in the country and becomes part of the TIRZ family.

“The company will not use tax incentives, but decided to use services from the state and support in infrastructure and land. It is a confirmation that with the model of operation of the zones that we set up, the companies recognize in us a true partner. This is a very significant milestone not only in the operation of the Zones but also in general in encouraging investments. This model, which we developed for Kiel, is a very important step forward for domestic companies as well.

Practical equalization of conditions for investment in the zones for domestic and foreign companies,” said Despotovski.